As one of the many fictional work genres, Tokusatsu can't stop people imagine what looks like "inside" the characters, either heroes, monsters, villians, items or even mecha. Based on the imagination, several creators created their own anatomy picture of Tokusatsu characters in different media.

Either lisenced or not, different illustrators might have total different thinking of the anatomy, and description detail conflicts occurred mostly in Showa Era.

The trend of illustrate Tokusatsu heroes started from the release of Kaiju Encyclonpedia (1966). Written by Tsuburaya Productions worker Shoji Otomo (大伴 昌司, Ōtomo Shōji) and illustrated by Noritsuna Maemura, Tatsuji Kajita and Takayuki Minamimura.This book went extreme popular among Japanese kids, even include the 7-year-old Naruhito. The book's use of red, black and white color scheme had a deep impression to a generation of Japanese people.

However, Eiji Tsuburaya, the creator of Ultraman, had clearly stated that he always dislike these "anatomy" because they limited children's imagination eventually. Shoji Otomo was later dismissed and forbid to step in Tsuburaya Production forever. Shoji finally compromise with Tsuburaya Productions in 1973, four days before his death.

However, another group of creator had different attitude to this "anatomy" trend, Toei and Shotaro Ishinomori are both relatively tolerant to this trend. Many of Toei-lisenced books always feature their own anatomy images, and Ishinomori himself even drew anatomy pictures of Kamen Rider and Gorengers himself and put them in his manga.

A lisenced Kamen Rider 1 anatomy figure made by Banpresto in 2018. Based on Shotaro's original illustration. 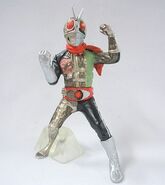 Another lisenced Kamen Rider 1 anatomy figure made by Bandai, people can notice that the details are totally different.
Add a photo to this gallery

The trend also affected the anime genre as well, started from 1974 Mazinger Z anime added Mazinger Z's anatomy in the ending sequence. Since then, almost every anime mecha will feature anatomy picture in a certain media.

Kyoto Aquarium used classic color scheme anatomy to advertise their salamander exhibition in 2020.
Add a photo to this gallery

Retrieved from "https://tokusatsu.fandom.com/wiki/Anatomy?oldid=30721"
Community content is available under CC-BY-SA unless otherwise noted.