The topic of this page has a wiki of its own: ZhanJiDui Wiki.

The Space Deleter team consists of 6 members: red, blue, green, yellow (considered gold by most people), pink and black. As the title suggests, it has a space and video game theme.

Thousands of years ago, alien invaders came to Earth through a wormhole, and caught humans from each nation to be their slaves.

In 2016, the National Galactic Bureau formed a special team to fight the aliens, composed of six gamers: the amazing Xiaolong, the smart Tianyu, the beautiful Qiong'er, the lonely Yijie, the quick Lijing, and the mysterious Tiexiong.

They were chosen to be pilots of five aerospace transportation vehicles, the RCVs, and are able to use the energy of the planets. 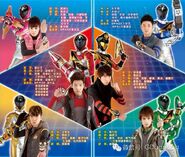 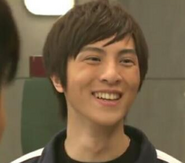 Li Tiexiong/John
Add a photo to this gallery

Retrieved from "https://tokusatsu.fandom.com/wiki/Battle_Strike_Team:_Space_Deleter?oldid=29861"
Community content is available under CC-BY-SA unless otherwise noted.