"Do you believe in Legends?"

On July the 1st, 2019, Vietnam's Transform Studio co-operating with Dive Into Eden officially announced their own original tokusatsu series, Mighty Guardian (Chiến Thần). After that, they joined each other and called themselves TRANSFILM.

Trung Quan Nguyen is a rebellious last year high school student who is hated by the others. On his school's picnic, he'd found an ancient cube and opened it - leading to the fact that he had freed the ancient Vietnamese Mythologies monsters from an ancient seal made by the 18th King Hung (also known as the 18th "Lac" Guardian).

He also gained the Mighty Guardian: Lost Avian's power, became the 19th "Lac" Guardian - following the 18 Generations of King Hung's willpower to protect the Vietnamese people first and then the safety of humankind. He has to learn how to balance between his student's normal life and his Mighty Guardian's bizarre adventure as soon as possible, before the monsters and some other parties could join and take everything from him.

The story will follow his adventure and the meeting with some new friends, new partners. From those events, every life lessons were learnt by him to become a better man in the future - besides the fights with the villains.

But after all, this is just the beginning for the Vietnamese Mythologies' Universe and the Mighty Guardians' Omniverse.

The "Era of Justice". 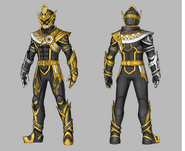 Retrieved from "https://tokusatsu.fandom.com/wiki/Mighty_Guardian:_Lost_Avian?oldid=32055"
Community content is available under CC-BY-SA unless otherwise noted.