For the team that this series revolves around, see Space Squad (team).

Space Squad (スペース・スクワッド, Supēsu Sukuwaddo) is a franchise that serves as a crossover between the revival of the Metal Heroes

and the Super Sentai 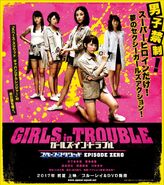 In an interview with Tom Constantine

revealed that Kyuranger vs. Space Squad is regarded as "Episode 1.5" of Space Squad as opposed to Episode 2, which would come later.[1]

Retrieved from "https://tokusatsu.fandom.com/wiki/Space_Squad?oldid=25718"
Community content is available under CC-BY-SA unless otherwise noted.