"I am the Emissary of Hell! Spider-Man!"
―Spider-Man's catchphase before the battle begin.[src]

Takuya Yamashiro (山城 拓也, Yamashiro Takuya) is the civilian identity of Spider-Man (スパイダーマン, Supaidāman), the eponymous protagonist of the Toei-produced tokusatsu series of the same name.

Takuya Yamashiro is a 22-year-old motocross racer who was given a bracelet from the last survivor of the planet Spider, giving him special spider-like powers and the ability to transform into Spider-Man. He has the ability to perceive threats from the Iron Cross Army with his Spider-senses, and fights the Iron Cross Army in order to avenge the death of his father, who was killed upon finding the spaceship known as Marveller. To conceal his superhero identity, Takuya acts as a weakling in front of his friends on purpose. As a result, Takuya gets chastised by his friends whenever he runs away from danger and is often compared unfavorably to Spider-Man. Moreover, his financial income as a motorcycle racer decreases after becoming Spider-Man due to his reduced participation in races, forcing him to assist Hitomi in her job to pay for his expenses.

Takuya assumes the identity of Spider-Man when he dons the protective suit known as the Spider-Protector. He is genetically altered as a result of the Spider-Extract injected into his body by Garia, gaining spider-like abilities such as sticking and climbing into walls. Moreover, he can also detect the activities of nearby enemies with his Spider-Senses and his physical strength is greater than the average person. However, he has also inherited some of the same weaknesses actual spiders have, such as a strong sensitivity towards cold temperatures.

Spider-Man keeps his true identity a secret from the public, although his reputation among the public as a defender of justice is established early on. Spider-Man even gets a hit song named after him called the "Spider-Man Boogie" (Episode 7). Only Juzo Mamiya and the staff of the Interpol Secret Intelligence Division become aware of Spider-Man's true identity (Starting with the Movie and every episode in the series from 11 and onward.), as they cooperate in various instances in order thwart the various schemes of the Iron Cross Army.

While Spider-Man spends most of the series fighting off Ninders (the Iron Cross Army's foot soldiers), he rarely finishes the Machine BEMs by himself, as they usually turn giant before Spider-Man has the chance to finish one off, forcing Spider-Man to summon Leopardon. Since he very rarely finishes an enemy by himself, always using Leopardon instead, Spider-Man occupies a peculiar position compared to other Japanese super-heroes, in which he has no finishing move or weapon to use such as Kamen Rider's Rider Kick

When Spider-Man faces the enemy in each episode, he will introduce himself while performing a dramatic pose (a tradition also adapted in subsequent Super Sentai shows). The catch-phrase he uses to introduced also varies between episodes. Toei's version of Spider-Man rarely uses his web shooter to swing between buildings, as his main mode of transportation is a car called the Spider Machine GP-7, along with an aircraft called the Marveller (his web shooter instead shoots a rope which he latches onto things and he swings with it using both hands like Tarzan). There are also moments where Spider-Man doesn't use any of his vehicles and moves on foot instead.

Spider Protector (スパイダープロテクター, Supaidā Purotekutā)
The proper name of Takuya's Spider-Man costume in the show. Unlike his Marvel counterpart, Takuya keeps his outfit stored inside his Spider Bracelet and wears it only when changing identities. When Takuya releases it from his bracelet, it instantly wraps into his body, allowing Takuya to change into it easily. It is said that only one of the original suits used during the filming of the show has been preserved. The suit that was preserved was the same one that was used during the interview with Stan Lee on the DVD set of the series. When the Japanese Spider-Man suit was seen by American fans on the streets during a photo shoot, many of them were not used to the bracelet on his wrist and asked why Spider-Man was wearing a "silly-looking watch".
Spider Bracelet (スパイダーブレスレット, Supaidā Buresuretto)
A bracelet wore around Spider-Man's left wrist, it substitutes the web shooters from his Marvel counterpart. It also used to store the Spider Protector when Takuya is not wearing it. Like the web shooters, the Spider Bracelet can shoot nets and Strings are made from a special type of liquid called "Spider Fluid", which is stored within the bracelet and produces an infinite supply. The bracelet is also equipped with a homing device that allows Spider-Man to summon the GP-7 or Marveller. No toy version of the Spider Bracelet was ever made during the run of the show's airing, while related products and manga adaptations omitted the bracelet altogether. Moreover, a lighter version of the Spider Bracelet prop was built specifically for action scenes, since the one used in close shots was too heavy for the suit actor to wear during stunts.
Spider Strings (スパイダーストリングス, Supaidā Sutoringusu)
A rope made of spider webbing shot from Spider-Man's Spider Bracelet. It can pull objects that weight more than a hundred tons.
Spider Net (スパイダーネット, Supaidā Netto)
A net made of spider webbing also shot from Spider-Man's Spider Bracelet. It is used to capture a group of enemies at once.

The Spider Machine GP-7 (スパイダーマシンGP-7, Supaidā Mashin Jī Pī Sebun) is Spider-Man's flying car. The car is equipped with machine guns and missile launchers inside its bonnet. It is usually stored inside the Marveller aircraft and exits the ship from the rear side of its bridge.[1]

The Marveller (マーベラー, Māberā) is the spacecraft that Garia came to Earth with. It is 45 meters tall and weights over 25,000 tons. It is usually stored underground and surfaces by cracking the ground whenever Spider-Man summons it. The ship's bridge is shaped like a leopard's head[2], which is where Leopardon's head is stored, and cracks left and right when transforming into robot mode (when it becomes Leopardon, the bridge is located inside its back). Although it's shape might not seem suitable to fly within the Earth's atmosphere, it has the capability of flying at a speed of Mach 15. It is capable of flying to outer space at the speed of light. Because Marveller is usually transformed immediately into Leopardon whenever Spider-Man boards it, it is rarely seen in spacecraft mode. The Marveller is primarily equipped with cannons on its bow, which are capable of destroying most Machine BEMs.

Leopardon (レオパルドン, Reoparudon) is a giant robot that Marveller can transform into. It is over 60 meters tall and has a weight of over 25,000 tons. According to Murakami, the name may have been taken from the German battle tank Leopard.

Leopardon is equipped with the following types of weapons, which are used accordingly to the situation.

Arm Rocket (アームロケット, Āmu Rokketo)
A flying rocket punch capable of destroying walls with five feet of thickness.
Arc Turn (アークターン, Āku Tān)
The decoration on Leopardon's head flies around like a boomerang. It emits a ray of light while flying.
Leopardon Strings (レオパルドンストリングス, Reoparudon Sutoringusu)
A rope that attaches into objects that is launched from its chest.
Spider Protector (スパイダープロテクター, Supaidā Purotekutā)
A shield created from an energy panel emitted by both of Leopardon's lower legs, it takes the shape of a spider webbing. This shield is shown in promotional materials and stills, but was never actually used in the show.
Sword Vigor (ソードビッカー, Sōdo Bikkā)
A sword attached to Leopardon's right leg, Leopardon never actually wields it in combat, throwing it instead for its finishing move against the Machine BEMs. It is a powerful weapon due to its capability of destroying most Machine BEMs in a single blow.

Leopardon is said to be the "mightiest instant killing giant robot in the history of tokusatsu programming" according to Toei's official site for the Japanese DVD release of the series.

In reality, only the first few episodes of the series featured actual battle scenes between Leopardon and the giant-sized Machine BEMs, but as the series progressed the dramatic portions of the episodes were made longer, while battle scenes were made shorter in order to keep up with the running time. Because of this, there were numerous episodes in which Leopardon would immediately throw his sword immediately after transforming from Marveller, finishing off the Machine BEM in each episode in a single blow.[3] In the end, Leopardon does not suffer any damages, not even during the final battle against the giant version of Professor Monster, who is finished off with the Sword Vigor throw like most of the previous Machine BEMs.

Moreover, Leopardon and the giant-sized Machine BEMs rarely appeared together in the same shots[4], and most of the giant-sized battles involved Leopardon in one shot and the Machine BEM in another launching projectiles at each other.[5] This was because the know-how on building a special effects costume imitating a giant robot was still rather primitive at the time and due to its large size, it often dwarfed the stuntmen in the Machine BEM suits. Due to structural problems, the Leopardon suit was difficult for the stuntman to move in and during the course of the series, the suit was damaged and later lost. As a result, all future fight scenes with Leopardon could only be made using stock footage of previous fights.

As a result, many of the later episodes had Leopardon finishing off each monster as a quickly as possible, making the robot look more powerful than the writers originally intended it to be. Toei's experience with Leopardon would later help them in filming the giant robot battles for their later Super Sentai franchise.

As described above, Spider-Man would stand before the enemy in a dramatic pose, while using a different catch-phrase depending on the situation (in the early episodes, he would often introduce himself as the "Messenger from Hell, Spider-Man" or the "Iron Cross Killer, Spider-Man"). After introducing himself, a version of show's theme song would play as background music as Spider-Man begins to fight. The same shot of Spider-Man conducting the pose would be used repeatedly a couple of times before battle.

Apperances in other mediaEdit

In one of Toei's promoting magazine story, Spider-Man and Kamen Rider V3 are seen fighting with the Iron Cross Group together.

As part of the comic crossover event, Takuya appears as a recruit of the Spider-Army to fight the Inheritors across the Marvel Multiverse.

During the fight an empowered Solus destroys Leopardon, however, Takuya manages to escape. Later Spider-Man 2099 and Lady Spider rebuilt Leopardon and augmented its weaponry using nuclear material (taking advantage of the weakness of the Inheritors against radioactivity). It was present in the final battle with the Inheritors, where it was reunited with a joyful Takuya. 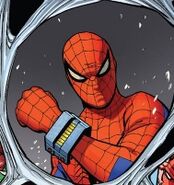 A rebuilt Leopardon with Spider-Man 2099 and Lady Spider.

Return of the Leopardon
Add a photo to this gallery

Add a photo to this gallery

Retrieved from "https://tokusatsu.fandom.com/wiki/Takuya_Yamashiro?oldid=27772"
Community content is available under CC-BY-SA unless otherwise noted.