49
Yusei Oji (遊星王子, Yūsei Ōji, Planet Prince) is a 1958 tokusatsu superhero television series. Created by veteran writer Masaru Igami and produced by Nippon Gendai and Senkosha, the series aired on NTV from November 4, 1958 to October 6, 1959, with a total of 49 episodes (divided into several segments). It was created to capitalize on the success of the Super Giant serials. In fact, the title hero (whose alter-ego was Waku-san, played by Toshio Mimura) bore a strong resemblance to Super Giant.

Toei produced two movies that featured the character, but in a completely different, more streamlined costume (and goggled helmet). The hero was this time played by Tatsuo Umemiya. The films were titled:

For release in America, these two movies were compiled into a TV movie titled Prince of Space. 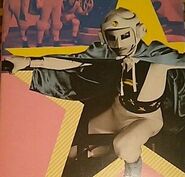 Planet Prince's appearance in the movies.